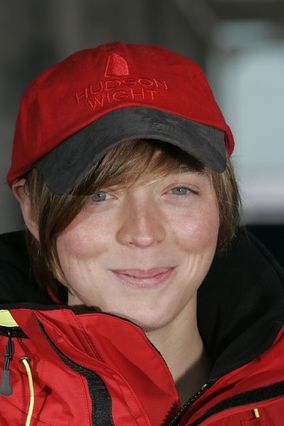 “I’m very excited to be able to launch my own, independent, Mini Transat campaign, with the loan of a Pogo 2 (no. 633). Having confirmed Hudson Wight as a title, naming sponsor, along with a number of product partners, I can now give my first ever season of solo offshore racing my full attention – so I’m extremely grateful for everyone’s help and support,” commented Lizzy.

She continued: “Hudson Wight is a unique and very honest brand, producing high performance kit using their own fabric, OceanVent. This bright company is producing exciting and groundbreaking developments within the clothing scene, perfectly suited to the needs of offshore racing.”

Lizzy, from Worcester Park in Surrey, is a qualified Speech & Language Therapist who has been sailing since the age of three, taking to racing in her teens and progressing through the ranks of various dinghy classes. At the age of 18 she started learning the ropes on board ocean-going yachts and decided her eventual objective is to compete in the solo round-the-world Vendée Globe yacht race. Lizzy’s selection for the British Keelboat Academy (BKA) in 2010 marked the start of that journey.

In 2011 Lizzy was the only female nominated for the Artemis Offshore Academy Squad, training in the Figaro and Mini 6.50 classes. She was with the Artemis Academy throughout 2012-2013 and also completed the internship with OC Sport, focusing on campaign management and logistics. This experience enabled her to kick-start her own campaign. 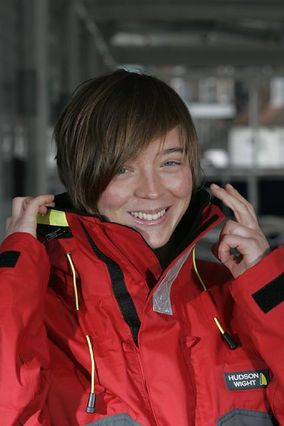 Before a skipper can line up on the start line of the Transat, a 1,000 nm solo and unassisted passage must be completed in either the Atlantic or Mediterranean. Lizzy aims to complete the Atlantic loop in May 2014, sailing between Ile de Re, the Rochebonne Plateau and the Conninbeg buoy off Ireland, this loop will take between 10-12 days to complete.

A further 1,000nm must be gained through official Classe Mini races, with one race over 500nm and at least one race completed solo. Lizzy will have fulfilled this aspect of the qualification by April, as she has just 400nm to complete.

Lizzy aims to be qualified for the 2015 Mini Transat by June 2014, competing in the solo 2,600nm Les Sables – Azores – Les Sables race as preparation for the epic crossing of the Atlantic.

As Hudson Wight Managing Director, Jamie Scrimgeour put it, “Lizzy’s energy, spirit and dedication to the task in hand is infectious. Her indomitable spirit, combined with her proven sailing prowess, is the ideal fit for Hudson Wight. We may be the new kids on the block but we’re going places, together.”